would a custom privilege system be a good idea for the smaller beta sites like this one?

Since the beta sites have a much smaller user group then any of the major ones, would it be a good idea to have a more relaxed privilege system? Such that you gain privileges earlier when you reach set reputation levels. Possibly only while the site is still in its infant stages to be decided by the stackexchange mods when it is mature enough to switch to the normal system?

I think this would be a good idea as long as it is not overly relaxed to the point where people who are new to stack exchange aren't given privileges that they don't fully understand. I feel this would make the tasks only allowed to users with higher reputations easier since more people would be given the privileges. Spreading out the burden in a matter of speaking.

Anyone got any ideas about this?

This is already the case.

Check out this meta post. Some of the information is possibly out of date, but you can see that there are differences. Not sure if there's a current post with this info.

As an example, my rep on this site and SU does not get me the same privileges... 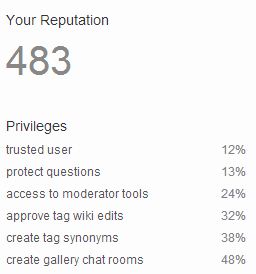 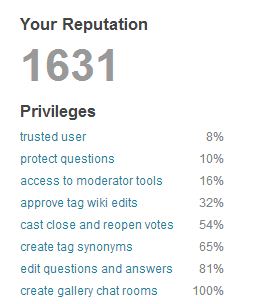 Not the answer you're looking for? Browse other questions tagged discussion .

Welcome!
This site is for discussion about Video Production Stack Exchange. You must have an account there to participate.
Help

1
Does a question like where can I find good Tutorials for x belong here?
0
Would this the right place to ask questions about authoring on Verse.com?