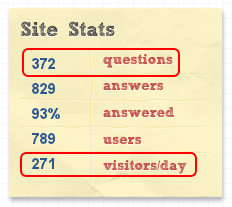 Welcome!
This site is for discussion about Video Production Stack Exchange. You must have an account there to participate.
Help
Visit chat

17
Is the scope of this site too narrow?
7
Proposal to give this site more time to populate
5
Deepening Engagement: A Call to Arms
5
Are ""how-do-I-make-this-sound" questions on-topic here?
1
Can i ask a question about publishing produced music?
-4
Proposal to Seed the Site with Useful Questions and Answers
0
Should we add the other professional A/V related diciplines to the site?

2
Video editing and production questions
17
Is the scope of this site too narrow?
7
Proposal to give this site more time to populate
5
Are ""how-do-I-make-this-sound" questions on-topic here?
2
Re-opening all video related questions on combined AVP site
9
Are non-production video and audio questions on topic here?
0
Should we add the other professional A/V related diciplines to the site?
16
Merging with Social Sound Design - Now In Progress!